Which LoRaWAN module to use in 2021

If your electronics projects needs to talk to other devices, but you don't have access to WiFi, LoRaWAN is a great alternative. The Things Network (TTN) is a global collaborative Internet of Things ecosystem which allows devices to use the network for free. No payment or SIM cards are required like with NB-IoT or Helium, you just need to keep to the usage limits.

The problem is that there are very limited options for LoRaWAN modules, given the current global chip shortage. As I'm based in the UK, I'm looking specifically for 868MHz modules.

The RN2483 LoRaWAN module from Microchip used to be the de facto option when you don't want to run a LoRaWAN stack on your microcontroller. Unfortunately they are out of stock until 2022 or later. Luckily there are other options, so let's have a look at what's out there.

RAK Wireless has a range of LoRaWAN modules where different microcontrollers are combined with LoRa chips. The RAK3172 is their first module that uses the STM32WL, combining a microcontroller and LoRa on the same chip. It comes preinstalled with a LoRaWAN stack, so you can use it with your own microcontroller over a UART interface.

Seeed Studio's LoRa-E5 module also uses the STM32WL chip, and is also controlled over a UART interface if you use the preinstalled stack.

Unfortunately both the RAK and Seeed modules suffer from a high transmit power consumption bug, which look like it may not be able to fix in firmware without reducing the range significantly.

Ai-Thinker's Ra-07H uses the ASR6501 chipset which also combines a LoRa transceiver with a microcontroller, and can also be controlled over a UART interface.

Ebyte's E78 module is also based on the ASR6501 chipset. It appears that both the Ra-07H and E78 modules are compatible with TTN v3.

There are other LoRaWAN modules out there, like Move Solutions' STM32WL-based MAWLE-C1, but the ones above are ones that were actually in stock at the time of writing. 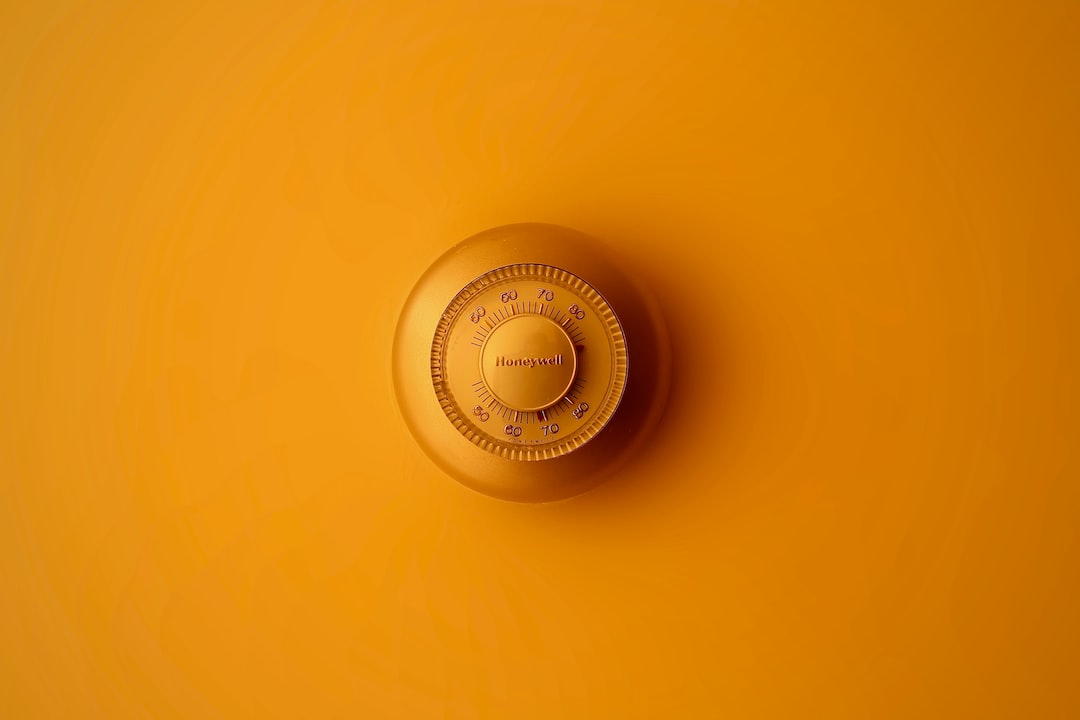 OK, one last part of the saga in Hive Home forcing me to buy a new hub, and hiding behind data privacy as a reason for not allowing me to use the perfectly functional one I have already. I sent them this e-mail last week:

I was told by a member of your technical support team today that I would not be able to use the Hive hub installed in the house I recently bought. Apparently this is because Hive does not allow a hub to be resold or passed on, but effectively locks it to one consumer for life, requiring me to buy a whole new hub. How would I go about recycling or having you reuse (and potentially resell) the existing locked hub? I'm hopeful that you have a better solution than taking it to a household recycling site, as I noticed on the Hive website that the Hub conforms to the WEEE Directive: https://www.hivehome.com/img/attachments/Declaration_of_Conformity_Hive_Nanohub_2.pdf

Today I got this response:

I hope this finds you well and my sincerest apologies for the length of time it has taken us to get back in touch.

I am really sorry but the adviser you spoke with on the phone was correct. We wouldn't be able to remove this from the current owners account as it holds their personal data. They should take this with them when they leave the property and they are the only people who would be able to get use out of the hub.

If the previous owners have not contacted you to look for this hub, then I would advise you take this to a household recycling site. My apologies that I could not be of any further assistance

Sigh. If I'm reading the WEEE Directive correctly, it's Hive's responsibility to provide a free recycling service and not pass the burden on to the local council. Even better would be to wipe the data from the hub and re-use/re-sell it, given the environmental cost of the device. And let's be honest: Who would design and sell a hub that cannot be factory reset?

OK, I promise I've stopped ranting about how Hive is forcing me to buy a hub that I already have. I now bought a new hub and two light bulbs for less than list price on Amazon. Trying to then have the existing Hive devices in the house recognise the new hub was another exercise in patience.

Of course Hive doesn't work with Apple's HomeKit, which I already use with an Eve plug. And there's no way I'm buying an Alexa. Open-source to the rescue: There's a project called homebridge which allows you to link other smart home systems, like Hive, to HomeKit. I set it up on a CHIP, the now discontinued $9 single board computer I had lying around in a drawer, and it works pretty well. At least I can now use HomeKit's automation functions, for example turning off the heating automatically when we all leave the house.

Which part is the most fun? Using Siri or my watch to turn the lights on and off of course!

After my blog post from two days ago, I left a one-star review of Hive on TrustPilot, just to finish venting my frustration at their bone-headed decision to not allow hubs to be re-used. I was a bit surprised to discover today that they left a response to my review, basically confirming what I said and adding another lie on their part: 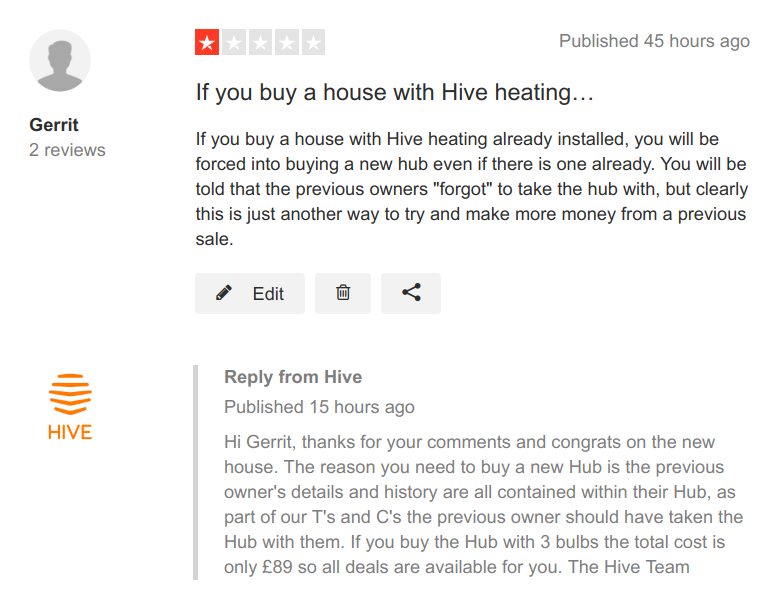 Which part are they lying about? The part where they say the previous owner's details and history are all contained within their hub. Anyone with a little knowledge of how IoT systems works knows that everything is stored on their servers, and that it's just the serial number that links the hub to the owner's account. I checked: The hub does have a factory reset button. Unfortunately (or is it fortunately) Trustpilot does not allow you to respond to replies from the company.

I do find it amusing that they say “the previous owner should have taken the Hub with them”, confirming what I said about how people just “forget” to take their hubs with them, and then tell me it's a deal to buy the hub I already have. Sigh.

OK, time for a quick rant in today's “big companies being assholes” news: Our new house came with Hive smart heating preinstalled – it was even listed as one of the features in the sales brochure. It turns out that Hive doesn't want to re-assign the network hub to a different user, and forces you into buying a whole new hub. If you buy it from them it's £80, but it seems like you can get it cheaper on Amazon through a reseller.

Tech support even had the audacity to tell me that the previous owners “forgot” to take the hub with, as a hub “can only be assigned to one account during its lifetime”. This is both bad for the environment, as I now have to throw the existing hub away, but also bad in terms of customer service. When will these companies learn?

ESP32 with LoRa and an OLED display? 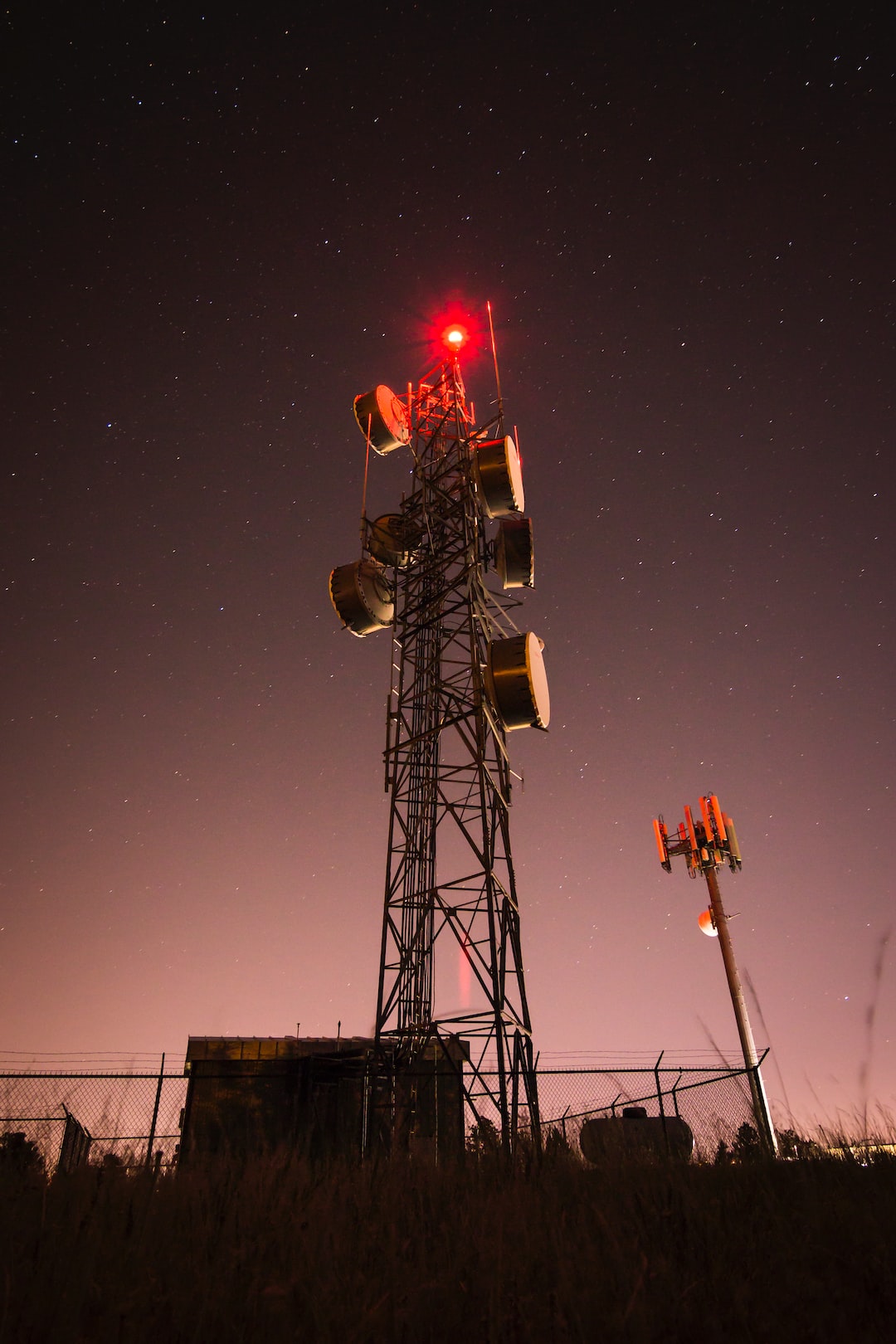 I've been looking for a LoRa module since I helped to install the first Things Network gateway in Swansea:

Today we installed the first @thethingsntwrk gateway for our region. We are actively contributing to the 100% open source #IoT network 😎 #ThingsConnected #Swansea #LoRaWAN #geeks pic.twitter.com/duQKy0WwWb

The Things Network is an open, community-built network using LoRaWAN technology, which allows for long-range (up to 10km) low-power wireless communication without needing a special license or monthly subscription.

This morning I saw a tweet from Tod Kurt (maintainer of the excellent node-hid Node.js library):

The ESP32 is the successor to the ESP8266 microcontroller and contains a 32-bit microcontroller with both WiFi and Bluetooth LE. Add LoRa and an OLED screen and this is a very impressive package for less than £20. Compare this to The Thing Network's own Arduino-compatible Things Uno that only has LoRa and costs more than double the price.

I had a quick look at The Things Network forums and it looks like a lot of people are already using these, as they were released towards the end of last year. There seems to be some antenna issues, but that these can probably be fixed if you do need longer range.